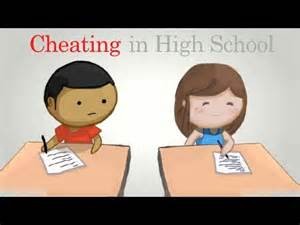 I am really surprised about the amount of cheating in school. I recently read a Harvard study that amazed me. They interviewed a variety of students from high school to college. Seventy-Five percent of the students said they felt it was acceptable to cheat. That is a really high number. It was a coincidence that I saw an old show that centered around cheating in school. It involved  three high school boys. One boy’s father made him stay in all week-end and study as it was a mid-term exam. A mid-term exam is prevalent in the United States. Halfway through a semester, the teacher or professor gives an exam to see how much the students have learned. It counts quite heavily towards their final grade. It is not a concept in other school and colleges in other countries. When Monday rolled around, the other two boys were sure they had it covered. They had hidden the answers in the paper towel bin in the restroom. They were sure they would never get caught cheating in school for the exam. However, like all good plans, something went wrong. The boy who had studied had a pen that leaked. He did not know about the cheating plan. After he washed his hands thoroughly, the began to dry them with the paper towels. He took a few towels and then one had words on it. It was a saying from a famous poet. He didn’t think anything of it and threw it away. Eventually, the other two boys asked to use the restroom and when the first one went in he discovered that all of the answers that he had carefully placed inside the paper towel bin were gone. What both boys didn’t know was that the teacher had seen this scheme before and had checked the restroom to make sure that there were no hidden cheat sheets.  Both boys were sure that the boy who had studied found their notes and used them. The next day the grades were posted. The boy who had studied scored a 92. The other two boys failed. They were furious. One of the boys decided to seek revenge on the boy who studied. He left an anonymous note for the teacher. That night the teacher called the good grade boy at home and asked him to arrive early and see him before class. The teacher told him about the note. The boy said he didn’t cheat. The teacher said he knew that as he wasn’t the type who would be cheating in school. The teacher knew by the handwriting which boy had written the note. He told the good grade boy who was furious. This was supposed to be his friend. He was betrayed because the other boy was too lazy to study and felt cheating in school was a better option. As adults we must give good examples of how not to cheat.  For many it comes easy.  For example, when I was young, there were restrictions on age for movie ticket prices.  Whomever I was with, the adult, would always tell me to lie about my age so they would pay less.  Its a very bad example.  Even at the grocery, if they give you back extra change do you let them know?  If you do, you are showing the children in your life that cheating is unacceptable.   Even at a restaurant, if they forget to charge you for an item on you bill, many people let it go.  They rationalize and justify by saying the owner is rich, its a large corporation, etc.  In many eateries, the waiter or waitress ends up paying out of his or her pocket.  There are also the people who charge a meal and then take the signed copy so that the restaurant has lost the charge. There are no examples of cheating in school or in anything else in the Good Gus Series as it could be misunderstood by young children.

https/www.missionmainstreetgrants.com  Please vote for me.  The zip code is 89108.