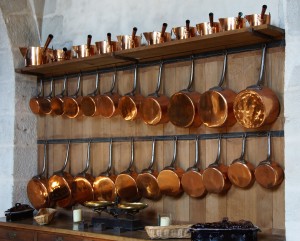 Competition for the most part is very healthy. People compete every day for jobs, recognition, awards, theatrical parts, public speaking, best authors, etc. I don’t like competition when people do anything regardless of the spirit of the competition to win. For example, I like the television show in the United States entitled, “Chopped.” The majority of the time the competitors compete fairly. However, the other day I was watching the show and I learned that the competing chefs discuss what they will do in the final round, which is dessert. The competition starts with four chefs. There are three courses, an appetizer, main course and dessert. After each round, a chef is chopped so that for the dessert round there are only two people left. Sometimes they compete for ten thousand dollars and other times they compete for their favorite charity. I saw a show recently at the end for the dessert round. I had learned that the competing chefs discuss what they will do in the final round. The chefs left were a man and a woman. The woman said she was planning to make ice cream. The male chef said it wasn’t his thing. When they started the final round, the man immediately went for all the ingredients for ice cream not only leaving her less to choose from, but basically faking her out by making ice cream. I will say the woman took it well and made a nice dessert anyways. Another thing I dislike is that when the professional chefs, who are the judges, are criticizing a chef for his or her meal, they smirk. I did watch the competition between the children chefs. Not only were they excellent at their craft, but they were considerate and fair to each other. The adults should take a lesson. There is competition in the Good Gus Series. In book fifteen, “Girls Rule” there is a horse race around the Pecos River. By the title you can guess who wins. Its was between three teams. Two of the teams were boys and one were girls. One team sulked when they lost, but they didn’t act in a mean or vindictive way. The holiday is almost here, but there is still time to choose a book from the Good Gus Series.