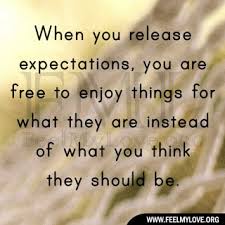 Expecting is an interesting word. It has a few definitions. Many times women who are pregnant say that they are expecting. Expecting a good grade or passing a test is automatic. When we attend a meeting we expect certain results. If the meeting fails to resolve whatever problems or goals everyone is expecting, then its considered a failure. Children are always expecting good things and positive results. As parents we are always expecting more from our children. For example, if a child is in a school play, the parents want their child to be in the lead as do all the other parents. When their child is chosen for the lead, their expectations of greatness from their child soars. If, particularly in the lower grades of school, their child is the lead part with no words and wears an animal costume, their hopes are dashed. They are expecting their child to also be disappointed and when the child isn’t, they are crushed. If a child is participating in a school activity with his or her classmates, it doesn’t matter what the parent is expecting as long as the child is confident and happy about their part in a play. I have seen many parents fall apart when they were expecting their child to score 2300 in the SAT’s and instead only made it to 1800.  I just saw a comedy show last week about two couples.  A man had been in the right place at the right time and just missed being crushed by something falling from a building.  He decided he was going to ask his girlfriend to marry him after his life had passed before him.  Well, he told his co-worker who couldn’t keep from telling his wife which was also the sister of the girlfriend with the close to near death experience.  She in turn slipped with the news to her sister and mother.  When they all went out to dinner, the husband kept giving the co-worker looks about when he was going to pop the question.  Then when the ladies left for the restroom, Mr. near death told his friend he had changed his mind.  Now, everyone who was expecting a proposal was disappointed.  In the end, the almost fiance’ decided that it was too much pressure.  At work, there are bosses,managers, and supervisors who expect too much from their employees.  They also seem to pay a lower wage expecting the people to remain in their jobs.  When Bart Bart rode into Pecos he was expecting a nice chocolate ice cream cone.  When Bob’s Sweet Shop was out of chocolate, Bad Bart turned into a bully.  Not all people expecting something a certain way do that.  You can be disappointed but not act inappropriately.