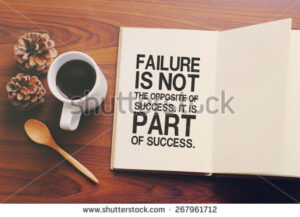 Failure is not who you are. Its an event in your life. It doesn’t define you as a person. Its something than happens. If you dwell on it then it may continue to occur. Many people if you ask them about themselves, they often say they are a failure in life. However, if you point out all the positives, they may see that failing at one thing doesn’t make them a failure as a human being. So many times, people fail and let one negative event destroy them as a person for the rest of their lives. How often have we all failed at something and rather than focus on the event, we face it and move on. However, if you look at people and their behavior, if they believe they are a failure, they will be at just about everything they do. Often a parent may say to a child that they are a failure, will never amount to anything, and should just give up, so they do. It can be something as small as a bad grade on a report card, failure to make the sports team, losing at a game, or simply not landing the ideal job. I have even seen that happen with adults. None of us are perfect and when something goes wrong, its easier to blame someone else, call them names and even say they will always be a failure. People who do that cannot face themselves and are are mean. I have seen so many shows where the theme was a person who was a failure in life. If someone had just taken the time to give them encouragement, analyze why something didn’t work out, then that person could start fresh and won’t let their failure haunt them throughout their lives. Have you ever worked with a person who always messes up? If you have ever tried to help them, did you find that they were so down on themselves that even when you showed them how to not make the same mistakes in the future, they simply couldn’t grasp it. They were so caught up in failing that an act of kindness couldn’t help. Its almost as if they are in so much self pity, that they can’t escape it. The prisons and jails are full of people who are failures, have been told they will never do better and as a result do not. I recently read an article about a woman who runs a restaurant in the United States who hires nothing but ex-convicts. She felt that if she gave them a fresh start that they would put their past behind them and that failure would no longer be in their future. Most of the ex-convicts did not prove her wrong. Sometimes its something small that gives a person having a really have a rough time, the opportunity to make significant changes in their lives and become successful both personally and financially. In the Good Gus Series, there are a few stories that show this very point.  Happy days!  The recorder has arrived.  Now all I have to do is figure it out!  I will be offering the series stories as a new item on the website.