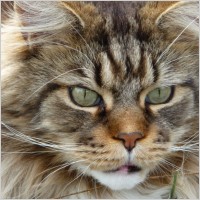 A couple of years ago I wrote book twenty, entitled “The Flying Cat.” I wrote it as I developed an idea from a cat I had seen on the news who had to be rescued. The cat had climbed up a telephone pole and couldn’t get down. Finally, the Fire Department was called to take action. A single truck went to the location with a hook and ladder and a fireman saved the cat. No one had any idea of how the cat ended up on the top of a telephone pole. I am guessing that once at the top, the cat looked at the seemingly long distance to the ground and was too scared to move back down the pole. In “The Flying Cat” a stray cat moseyed into Pecos. It was not a friendly cat, but the twins, J.C. and Bronco, left out a bowl of milk for it every day and when they checked the following day, the milk was gone. They tried to pet the cat, but it snarled at them. The story takes place the week-end right after Thanksgiving. Everyone in town is shopping and the families from the surrounding areas are also in Pecos as well. All the children decide to have a baseball game. They started the game near Sheriff Gus’s office and have a wonderful time. Then, the stray cat that the twins had been feeding, sat down on one of the bases and refused to move, Henry Kelly yelled at it to go away and it did right up the drain pipe connected to Sheriff Gus’s office and then onto his roof. The older boys, J.C., Bronco and Frankie then decided that the Sheriff would be really angry if they knew it was one of the baseball team player’s fault that a stray cat was on his roof. They formed a plan and went into action. The twins slipped quietly into their home for a few needed supplies. J.C. shinnied up the pipe, (he was originally nick named Johnny the Cat as he could climb almost anything). The next task was getting the cat to like him. Eventually, J.C. and the cat are saved but not by a fire truck. As with all the Good Gus Series, many people join together to solve the problem. Since there are only forty-six shopping days until Christmas and even less for internet deliveries, I hope you will choose a book from the Good Gus Series showing your child or children the value of cooperation.