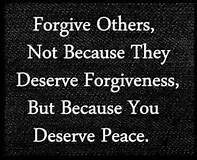 Forgive and forget is an old saying.  There are people who believe in it under certain circumstances.  For example, I saw an old show recently in which the female star was a reporter.  She wrote an article, even though she is single, about married couples who should forgive and forget.  She received thousands of letters complaining that she really had no idea what she was writing about and that being able to forgive and forget was not that easy and sometimes downright impossible. She attended a party that the president of the company was holding and all the women pounced on her over her article.  They were quite adamant that to forgive and forget was not always the answer or even possible. She didn’t like what they had to say, naturally, so she quietly slipped away from the party.  A day or two later, her boyfriend, who was a doctor, seemed in her opinion, to be overly friendly with a patient.  The green eye monster came out and eventually she became angry because she thought he had spent the night with the very attractive patient.  When the boyfriend asked her what happened to forgive and forget, her reply was, “It wasn’t supposed to happen to me.” He walked out on her and she was furious.  Eventually, the doctor/boyfriend came over to take her out to dinner and she wasn’t dressed for the occasion.  He also brought along the attractive patient and her husband.  It was then the reporter decided to forgive and forget.  She should never have written an article about forgive and forget if she didn’t really believe in it herself.  There are many religions that believe in forgive and forget.  However, how can a person forgive a murderer?  It seems to be insurmountable in my opinion.  I have seen people who have forgiven more than one murderer who have killed their daughter or son.  They have to be exceptional human beings.  There are events in life that are insignificant and petty and yet, particularly within families, no one can forgive and forget.  Even children learn to forgive and forget and as parents it is important that we forgive and forget their wrong doings so that they can learn to be decent people as they grow.  In the Good Gus Series, there is an underlying theme of forgive and forget.  The parents don’t hold grudges or throw back in the children’s faces their wrong doings.  Anyone who has had parents like that knows that even the smallest mistake needs to be forgiven.  “Misplaced Trust” will be available next week on maecharlesbooks.com