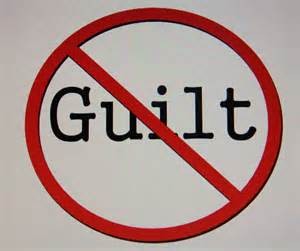 Guilt is used everywhere today. There are guilt free  food products available citing that if you eat a particular product you can have no worries about gaining weight. How can they make that statement? If you eat a product that is guilt free, it still has calories and there is the possibility that a person would gain weight anyway. Then there is the guilt we learn about as children. When a child does something wrong, occasionally the face gives them away. As much as they try to deny it, parents seem to know. As children we have to learn the feeling of guilt. Once we do, parents, friends, significant others, and even workmates can use it to their advantage. Once a person figures out an individual’s vulnerability, if they are unscrupulous, they will prey upon that weakness and use guilt to their advantage. In the work place, I am sure you have seen other workmates who have been having difficulties. Another individual will do a small favor for that person and then when they don’t feel like finishing a project or even their daily work; they want to take a long lunch or even leave early, then their small favor turns into asking the other person for a really big favor. They use the guilt factor which makes the other person feel obligated to give in and reciprocate.  I have seen individuals use that same small favor over and over again to get what they want using the guilt factor.  There are some people who possibly grew up with their parents constantly using guilt as a method to control them.  So that when they matured into adults themselves, their childhood training could then be utilized by an unethical person.  Do you remember when you were a child and I have heard parents say this today, “Eat all your dinner.  The are children starving in India, China, Africa”a or whatever country was in need during that time.  The guilt factor for that never worked on me as the food was awful and I didn’t care if I ate it.  It really still doesn’t work today on children either.  There are people who are guilty of a variety of things.  People even feel guilt if they cheat on their diet.  Sometimes if a person makes a wrong decision, they worry so much about their decision and then if its wrong, their guilt is overwhelming.  How many times have you seen a show where one person in a relationship cheats on the other.  Then to relieve their own guilt, they tell their partner which sets off a whole chain of events. I have noticed lately articles about bullies having so much guilt for their past behavior, literately hunting down their victims to apologize. We are all human beings with feelings. Unless we do something truly wrong, we shouldn’t feel guilty about anything.