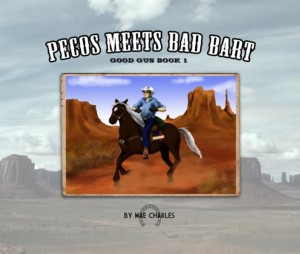 Holding a grudge is bad for your health. Learning how to let go of past injustices is difficult. You shouldn’t forget them, but you should let go. If we are holding a grudge, it’s a bad example for our children. It shows them they should hold a grudge and carry it with them their entire lives. Sometimes when people hold grudges they are perceived and not real. There are so many old feuds such as the Hatfield and the McCoys. If they were alive, do you think they would even remember what started the grudge? We all make mistakes. Sometimes we offend people and are unaware of it, but does that mean that the other party should be holding a grudge? I think people who are holding a grudge are unhappy. They dwell too much an the past and not on the here and now. There is so much violence that it makes me wonder how many of the people perpetrating the violence have grudges in one form or another. Bad Bart in book one, “Pecos Meets Bad Bart” has a grudge against just about everyone.  He becomes furious with Bob at the Sweet Shop because he is out of chocolate ice cream.  He seems to be angry with everyone and has a mean look on his face all the time.  In the end, Sheriff Gus shows him kindness and he has no idea how to react.  If you are considering a book to give the child or children in your life an example of being brave, standing up to a bully and solving a problem without violence, I urge you to consider “Pecos Meets Bad Bart.”