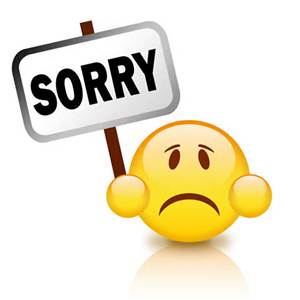 Brenda Lee, sang when she was fifteen years old, a song entitled, “I’m Sorry.” It was number one on the United States Charts in July 1960 and it hit number twelve in the UK charts. It was more of an apology to being such a fool for another boy. People say I’m sorry quite frequently often not really meaning it when they say it. In some countries it’s been shorten to sorry if they bump into you. When children use those words it is usually because they are trying to apologize for something wrong. It’s generally anything from touching their parents items that they were told to stay away from to doing things they were told not to do. Sometimes they really mean it and other times they just don’t want to be punished. It’s a life lesson that teaches us how to deal with errors are we mature. As teens saying “I’m sorry” doesn’t quite cut it if they wreck the car, are caught skipping school, drinking, smoking or trying drugs. The punishments are severe and in some cases the parents who really don’t care simply toss their children out of the house. This only makes the children’s lives much worse and in some countries if your child does what is considered a possible criminal act, they can be sent away to juvenile detention where the children reside until the parents will take them back or they turn eighteen, whichever comes first. It is certainly a bad way to start off life as an adult. When children and teens make mistakes helping them turn their lives around is the best approach. I recently wrote about children who ended up in a program entitled “Scared Straight.” The majority of the children were scared into turning around and going down the straight and narrow. As adults, when we say “I’m sorry” its usually during an argument but it could also occur during an auto accident, destroying another person’s property, or for inappropriate behavior. When couples cheat on each other, they use the words ‘I’m sorry.” However, if they continue that type of behavior, they really aren’t and there is just no point in saying the words. Often a person will make a crude or insulting remark and then say, “I’m sorry.” Do you believe them when they say those words? I wouldn’t because they said the words because they wanted to and desired to hurt that person. No one was forcing them to say the words. A very long time ago there was a comedian, Flip Wilson, whose favorite line when he said something inappropriate or insulting was, “The devil made me do it.” It was a joke and it was funny. Pretty soon people started using his line to be rude to others thinking they would assume it was a joke. Needless to say, it didn’t last long! Just look at the past few days.  People have been escorted off planes for a variety of reasons.  The articles didn’t state if anyone said, “I’m sorry.” When people behave badly, what makes them think that saying “I’m sorry” is going to solve it.  They knew what they were doing at the time.  The children in the Good Gus Series do wrong things, don’t always listen to their parents but the lessons in the stories are designed to make the readers understand that when you do things that are wrong there are consequences.