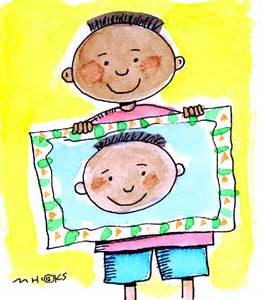 Do you have an image of yourself? How do you think others see you? We all have an image of ourselves. Sadly, people who perceive themselves as too fat, too thin, ugly, not physically fit, thick or thin hair, too many lines or wrinkles, or simply as a loser obviously have a bad image of themselves. There are groups around the world trying to redefine not only their personal image but to encourage others to see themselves as beautiful or handsome. The self image usually starts with positive or negative comments as a child. A child who matures into an adult with a good self image will be more successful and have less problems than the child who has been put down, insulted, told they were ugly and even stupid, will have a battle to succeed. When you look at yourself what do you see? Do you see a vibrant, attractive, happy and successful person? There are so many conditions that stem directly from a poor self image. I can name a few such as anorexia, overcompensating at the gym for large muscles, too much plastic surgery and dressing in unusual styles. I have seen a show entitled “Love, Lust or Run.” It stars Stacey London and people apply to her for an appearance makeover. Some of the women on her show wore outfits that were extremely tight, too short and very low cut. There were also ladies who wore costumes every day and one woman I remember had to have a turtle on every article of clothing. It was really amazing that these women used these tools to help them with their self image. However, they really had poor self images and were trying to hide it by making people notice them with their selections of attire. There is a girl whom I have seen commercials for that has a show on the TV entitled “My Big Fat Life.” She has PCOS and tries really hard to overcome her weight issues but in an extremely positive way. I also noticed that plus size women are making it known to shops and the general public that they have a positive self image and should be appreciated for whom they are. The self image of the invisible illness, depression, which I had written about in an earlier blog this past year, should be mentioned. Their self image is so poor that they really believe no one wants them around. It is a sad illness. The characters in the Good Gus Series all have positive images. The stories are multi-ethnic and include people of all shapes and sizes. There is no need to make any child feel uncomfortable  while reading a positive book particularly if they are told by others that their image is less than desirable.