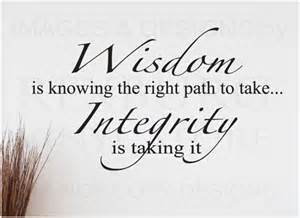 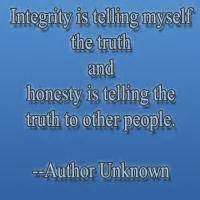 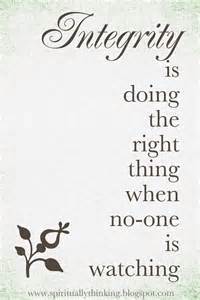 How many people do you know that have real integrity? I would like to think many, but the truth is there are too many people who do not have integrity. It is always a pleasure to meet people with integrity. When you listen to politicians, regardless of the country, do you feel they have integrity? Many people claim to be honest and fair but really are not. There are countless stories about honest and fair people in books, magazines, movies, etc. Sadly, though when you investigate, its just that a story. When I think of integrity I also think of people who are kind to others without making it known. For example, giving gifts anonymously to make a person’s life better during a difficult period. Of course, during the holiday season, people give gifts to help out the less fortunate, but what about the rest of the year? I saw an old show once about a man who had a professor that helped him while he was in college, and when he graduated and started his own business. There were many times he just wanted to give up. His professor encouraged him and gave him the moral support he needed. As the professor aged, his income diminished. He would visit the man from time to time particularly when his rent was due and he was low on funds. The man would slip him a bit of money always keeping the professor’s dignity in tact. The professor had written a book that he was sure that one day would be published and he would be very famous. The town would then hold a big banquet for him and everyone would know he wasn’t the failure that subconsciously he felt that he was. The man and his wife gathered a few people and enlisted the help of the local newspaper and without the professor’s knowledge, put together a nice banquet. Everyone applauded when the man walked into the restaurant with the professor. The man’s integrity guided him to help someone in a different way to give the professor back his dignity and pride. That is true integrity. The residents of Pecos, Texas in the Good Gus Series have integrity. They are all honest and fair. As you teach your child or children lessons about life, I hope you will consider the Good Gus Series as a good example of integrity and good family morals.

Thanks for sharing – ill pass it forward! You should try to get more people here.. Use Fast Auto Commenter its working for any webmaster i talked too..
Best of luck