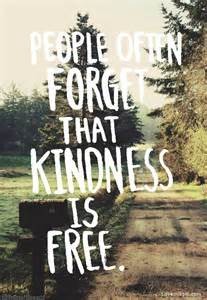 Today I saw a perfect example of a complete lack of kindness. There was an article on the internet on Yahoo about an autistic girl and her family being thrown off an United Airlines Flight. The staff felt she was disruptive. The mum had explained prior to the flight that the girl needed warm food. The girl was making sounds but all of the passengers except one said that she was no worse than a crying baby. They also felt that the staff and pilot went too far by landing in Utah and having the family removed from the flight. Many of  the passengers complained during the entire process telling the staff that their actions were unnecessary. I frankly agree. That was not  kind behavior at all.  The mother was so angry not to mention humiliated, that she is planning to sue United. What ever happened to being kind to one another? Why is it that people in authority of any type lose consideration when they can wield their power? How often have you been on a train, bus or a tram and a younger person remains seated in the seats reversed for older people or the disabled? It takes only a few minutes to be kind to someone and give them a seat. When you are in line somewhere and the day is going badly not only for you but the customer service people as well, a few kind words once you reach the front desk not only brightens their day, but yours as well. Besides that, they will go out of their way to return your kind words in assisting you any way possible.  It only takes a nano second to be kind and brighten someone’s day.  In retail stores, and even banks, the employees are trained to be bright and cheerful and basically kind to all customers.  They want the customers to remember their establishment and return. Many times I have seen signs that say “Practice acts of random kindness.”  I have seen people put money into a stranger’s parking meter to save the person from a ticket; individuals run to the aid of a person who has fallen; assist an individual with a cane or a vision problem across a street or onto a bus and so much more. In the Good Gus Series, everyone is kind except for Bad Bart, but even he has to turn it around in the end.