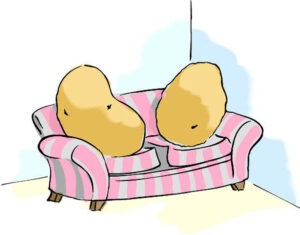 When you think of lazy what comes to mind? Do you think of someone just sitting around watching the television, eating and drinking? When I think abut lazy many images come to my to mind. I initially think about people too lazy to pick up their clothes when they are changing and dressing; asking someone to help you with a task and their answer is always, later; or the person who cuts corners at work because they are too lazy to do the work correctly. There are so many forms of lazy that it becomes very frustrating to me sometimes. I dislike intensely when you pay for a service and not only is the service preformed in a sloppy lazy way, but then they are too lazy to clean up after the mess they leave. Cutting corners when you can if it doesn’t matter because the end will justify the means and its a good product or completed task isn’t lazy in my mind. Its when you pay for a service such as backing up your computer’s data, and when its returned to you the only information is the basic. Where did all the files go? How can the company be that lazy? How about when you make a mistake on an address, but you call the post and they assure you the package will be delivered, and then one month later its returned to you. Not only is it lazy but it is a lack of consideration for their workmates and the customer. If you are lazy in cooking, you can see it almost immediately. The food will not be presented in an appealing way. When you eat it, your taste buds will probably object to the unpleasant flavors. In the Good Gus Series, no one is lazy. There just isn’t any time plus they all depend upon each other. So, the next time your child leaves his or her clothes on the floor or won’t pick up their toys, give your child a lesson by having them read a book from the Good Gus Series.