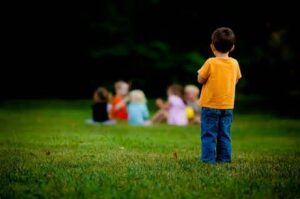 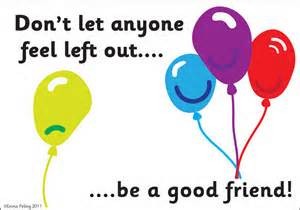 How often have you ever felt left out? I am sure it has happened to everyone at one time or another. We have been left out as children at school, left out not receiving invitations to parties, not included as our siblings began to mature, etc. There was an article the other day on Yahoo about a little girl, Gabbie, who had been left out. She is seven and has a genetic disorder that tends to make tumors grow and might lead to delayed development. Gabbie had seen many of the children in her class receiving cards and assumed that they were for a party. When she arrived home from school, she asked her mum why she didn’t receive one. That was heart breaking for her mum. All Gabbie wants, like any other seven year old, is to have friends and be a part of everything. The mum was so upset she posted an article that went viral and now people from around the world are sending Gabbie cards. Why didn’t the parents who were giving the party include everyone in the class? They were young once. Why didn’t they remember what it felt like to be left out? Early on in school and even in life, cliques develop. They are generally the most popular people and they seem to dictate who can be in the group and who cannot. I have seen in movies, on TV shows and in real life, children who were best friends with someone and then the best friend is invited into the clique. The other child is no longer the best friend and is completely left out. That is harsh even for children. I have also seen it in the work place. If you have ever worked for a company that had more than a few employees, you have probably noticed that little cliques form and suddenly if you were part of the coffee break, the new clique suddenly makes you unwelcome and feel left out. I never believed in the cliques. I felt if a person was my friend, that was enough. It was not necessary to be in the clique. Plus, in the movies and TV, the cliques seem to be dictatorial about everything. Who would want that? In the Good Gus Series, there are no cliques and no one feels left out except in “The Special Gift.” Liam is forgotten when there is a fire at the orphanage and when he returns everyone has left the area. He felt alone and very left out. However, as in all the Good Gus books, there is a happy ending.