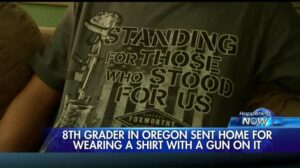 Recently I read an article about a boy who was sent home from school because the principal felt his shirt was offensive. It was quite a surprise as the boy is an eighth grader in Gresham, Oregon, USA. The boy’s shirt said, “Standing for those who stood for us.” There are good men and women around the world have have fought and died for their countries. How a principal in a small location in Oregon could believe that the boy’s shirt was offensive is disturbing. The boy was given a choice; either take off the shirt or go home. He opted to go home and his dad went to school to collect him. The dad said he stood by his son’s decision and didn’t feel that in any way the shirt was offensive. It has a pair of combat boots with a rifle standing in them with a helmet on top. Children and even adults play video games that are certainly more offensive then the boy’s shirt. The games contain a great deal of violence. Many people find a variety of things offensive as they go through life. They find fault with other’s appearances, their vocabulary, how they handle themselves, the vehicle they drive, the color of their skin, their homes and their beliefs. When one person takes offense over another person’s words it generally leads to arguments. Sometimes couples feel their partner has been offensive towards them which leads to hurt feels, break-ups and even divorce. There are people who make these remarks to get a rise out of another person and to hurt them. The old saying “Let it roll like water on a duck’s back,” should be a trait that many may choose to have. How many wars have started over one country taking offense from an act (unless is is really devastating) or remarks that weren’t necessary. Next thing you know they are fighting and people are being hurt. Being sensitive is one thing, and no one should certainly accept unkind or cruel remarks towards them. However, at the same time they should recognize who is saying the words and consider the source.   In sports there are always two sides; the offensive and the defensive.  They are there to play a game and not physically harm each other while playing.  Sadly, that is not always true in competitive sports.  Particularly when so much money is at stake.  In the Good Gus Series, there is nothing offensive in either the stories or the actions of the characters. It shows children how to handle situations without getting into a fight or resorting to violence.