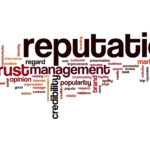 In the old shows people always needed to keep their reputation in tact. It was always very important.  In an old “Happy Days” Fonzie came back from a trip and discovered Ritchie had been dating a girl he was previously dating.  Everyone was a wreck.  After all, no one disrespected Fonzie by dating one of his girls.  Of course, they had to meet at Arnold’s Drive In in Fonzie’s office better known as the men’s room.  This was a huge dilemma for the Fonz because he had a reputation to maintain. If anyone even looked sideways at one of his girls, they were in trouble. However, Ritchie was his best friend, so what was he to do? As he and Ritchie talked he had to come up with a solution.  While this discussion was going on, the Fonz figured out he started dating someone new on Monday and Ritchie didn’t start seeing Fonzie’s girl until Tuesday.  Therefore, there was a loophole.  However, he still had his reputation to maintain to show he was a tough guy.  In between, a fellow kept coming in to try to use the restroom and the Fonz kept throwing him out.  He finally came in one last time when he let him use the facility the door hit Ritchie’s eye.  Unfortunately for Ritchie, when the door hit him it left a black eye. The Fonz was elated as now Ritchie had proof of Fonzie’s manhood and he didn’t hit him.  He could now keep his rep in tact.  When they walked out of the restroom everyone just stared.  It was a win win!  In the Good Gus series everyone had a good reputation.  The series is online at Kindle, Nook and Waterstones. “Misplaced Trust” is also available online at 24 Symbols, Apple, Nook, Kindle, Kobo, Page Foundry, Scribd, Playster and Tolino.