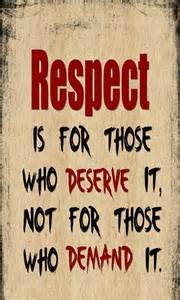 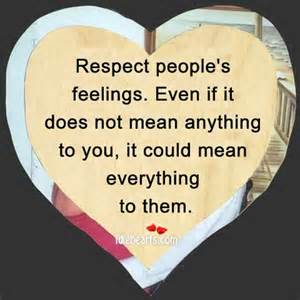 Aretha Franklin sings a song entitled “Respect.” The premise of the song is excellent. She stresses the importance and value of respect. Young people are  rarely treated with respect.  Most older people think that they are not mature, haven’t had enough life experience, and lack the knowledge that they have.  It may be true in some instances but not in all. I think everyone should be respected unless they act otherwise.  Many senior people feel that they should be respected.  However, many of them do not deserve respect.  I can think of a few older people who have been rude, know it all, snide, smart mouthed their entire life.  They have felt that only their opinion was of value and everyone else’s simply didn’t matter.  What is worse, is that, and this is one person comes to mind, was not always right even though he believed he was.  When he was younger, his mother expected him to treat her with respect.  His attitude, at that time, was you have to earn respect.  Needless to say, he was very disrespectful to his mum, not to mention almost everyone else.  Now that he is old, he demands respect.  Sadly, he doesn’t deserve it.  He is still the same mean, nasty, foul mouthed, rude, disrespectful person he was when he was young.  Even when he had a brush with death and saw his life pass before him, he still didn’t change.  He is one of those individuals who believes he is smarter than everyone else and knows it all so therefore he should be treated with respect.  I would by lying if I said I respected him.  In reality, anyone who knows him or even meets him have absolutely no respect for him.  You may have a relative, either male or female, just like him.  We all should be treated with respect in the workplace.  I have seen many people in a position of authority, treat what he or she consider the underlings, interact with  his or her employees horribly.  They seem to have no respect for the workers and treat them accordingly.  Sadly, most people do their best to do a good job and should not be treated that way.  I am sure you have seen numerous movies where the person in charge treated everyone else like dog meat.  Even the story, ‘Cinderella’ shows that the stepmother treated her with anything but respect.  She felt that Cinderella was her slave.  She was a person and obviously, the moral of the story is that no one should be treated that way. In the Good Gus Series, everyone treats their fellow neighbors and families with respect.