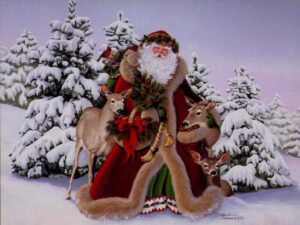 What is on every child’s mind tonight, Santa Claus! Many children believe in Santa Claus and a few do not. It is always a let down and disappointment to the child and the parents when he or she finds out Santa Claus isn’t real. The original Santa Claus, or Kris Kringle did a wonderful thing. He gave children small gifts which they really appreciated. There are so many wonderful people who act as Santa around the world this time of year to help families and people who are alone feel good about the season. Today, there are so many commercials and so much competition for the number one gift for children at Christmas, its almost absurd. One year my son wanted a toy that was advertised as the Christmas gift for that year. I looked everywhere for it and the more I looked the more I was sure it was going to be extremely expensive. When I finally found it, it was less than two Euros or Two Dollars. I was amazed. Funny thing, he absolutely love that toy. He liked the idea of Santa Claus and I even have a few pictures of him with Santa Claus. My daughter on the other hand hated the idea, wouldn’t go near him and thought it was ridiculous. It appears that her daughter, my granddaughter, feels the same. I hope as you lay out the gifts after all the children are asleep, that they love their gifts from Santa Claus. In the Christmas book, “The Special Gift,” Sheriff Gus becomes the Santa Claus to Ray and Liam.