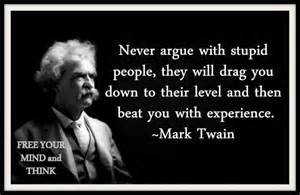 I was listening to a discussion of a group of people. They were talking about stupid people, stupid things people do, stupid rules, laws, etc. One person was complaining about how stupid the drivers were in a particular location. She was ranting about their lack of ability, inconsiderate behavior and just plain stupidity.  The drivers either ran red lights, which is dangerous, drove too slow for the speed limit, stopped with no reason in the middle of the road, screamed and yelled at other drivers for their own stupid mistakes, gave the finger, and so forth. She went on to say that road rage is out of control. There was an incident in the city next to where she lives where two drivers became angry at each other over some driving infraction. They both stopped and one one driver stepped out of his vehicle and walked up to the other driver who was also stopped. He was about to give him a piece of his mind when the second stopped driver rolled down his window and shot him. The man walked back to his wife who was sitting in his car and promptly died. That is anger so far out of control that they ruined their lives and for what? Stupidity! Another person was discussing a girl in his college class. She purchased a car for over one thousand dollars with five hundred thousand miles on it. Whoever sold it to her must have absolutely no conscious. That girl was told by this person that she was stupid. She is taking a class to become more independent and learn how to take care of herself and her vehicle.  She never even sought advice to purchase a car that she could drive for more than a few months. Where are her brains? Most people understand about buying a car and what you should look for. It made me wonder why she had never heard anyone discuss cars, their values, etc. The next person discussed the people whom he had to deal with at work that were really just plain stupid. They hadn’t even tried to advance themselves mentally. They liked being stupid and he couldn’t understand that. In this day and age, with institutions of higher learning so readily available, the internet, and educational television that could help people advance academically simply by availing themselves of all the opportunities around them it seems difficult to understand. There are so many people who start out not really knowing anything, possibly believing they are stupid and push themselves to learn and not feel stupid. We all feel stupid at times. I made a cake today and when I was almost finished I realized I put in one wrong ingredient. I really felt stupid as I had to throw it away and start over. In the Good Gus Series there is no reference to stupid. When Frankie, Ray’s nephew, has to stay with his uncle until his parents are well, he is behind in his studies. Rather than say he is stupid, Miss Patty offers encouragement and extra lessons to assist him to reach the class level. He then becomes the winner of a spelling bee in the book “Can Bees Really Spell?”  With Easter less than one month away, I hope you will consider a book from the Good Gus Series.