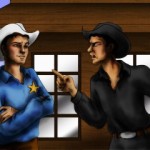 It is amazing how threatening people act each day towards others. Just this morning, my daughter was leaving her condo complex when a group of individuals started walking towards her car in a threatening manner. Fortunately, her windows were rolled up. Then they stated making derogatory remarks to her. None of this was called for so why did they do it? Was it because they could; that they are bullies and she was a female alone; or because they really wanted to hurt her? I don’t know where the guard was because it is a gated community. Then about one hour later, in a different location, my son was standing in line for coffee at McDonald’s. The girl behind the counter who was serving the customers was very attractive and well spoken. Her patience, however, was being tried as the customer in front of him was not only rude but was speaking to her in a threatening way. His order had been messed up and she was only to glad to give him new food for free. Somehow that just wasn’t enough. My son kept staring at the girl and she could tell by his expression that if that customer made a move on her he would be right there to help her. Finally, in no uncertain terms, the girl told him to basically back off. She gave him his food and he went off grumbling. The girl said thank you to my son even though he didn’t do anything.  Threatening behavior is really unnecessary unless you are in a bad situation.  There are people, even a few in the workplace that speak threatening words to the individuals they manage or supervise.  Because many people cannot afford to lose their jobs, they endure it.  There are laws in most countries that prohibit this type of behavior.  However, since most of the time it’s the manager’s or supervisor’s word against the employee, the employee loses and is either disciplined and let go.  Sometimes parents use threatening words to try to make their child behave.  The majority of the time it doesn’t work because the parents do not follow up with severe actions unless it’s a punishment of no TV, video games, movies, etc.  The bad parents who do make threatening remarks to their children and do follow through with cruel punishment end up destroying the children as individuals.  In the Good Gus Series, there are no threatening words.  As the world is changing, and threatening actions occur almost daily, I felt that the books should reflect good safe reading.