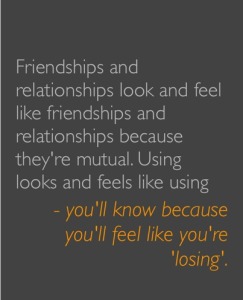 Almost everyone hates being used. Its hurtful and even embarrassing. How many times have you felt used by other people? In some instances, there is some type of pecking order in organizations and large groups where people use other people to get ahead. Sometimes children use other children because they have the latest electronics, the other child’s parents have more money than you, they lived in a fancier home, or they just want to be popular. Many times teenage girls use each other and boys to achieve whatever personal goal is on their mind. I saw an old show where a new teenage girl moved into a neighborhood. She was admired by all the boys and she knew it. She would ask boys for favors to do things for her and they would practically fall over backwards in their willingness to please her. She had a little brother who played with one of the teenage boy’s sisters. He knew and understood his sister really well and he was only ten years old! Mostly he ignored her and her behavior. The teenage girl asked the teenage boy if he would help her with her English homework; he agreed. They set a time and then about two hours before the designated time, she dropped by just to say hello and then asked him to hold a dress in a box claiming she had errands and didn’t want to carry it. When he brought the box into his house his parents immediately suspected he had bought her a fancy present. They confronted him and he explained. Another hour went by, and his older sister came in to tell the parents that the girl was using her brother to sneak out on a date, even though she was not allowed to date. The mother was furious, but the dad said, “Don’t say anything to him. He will figure it out.” And figure it out he did! Once he realized her scheme, he chewed her out royally. In the Good Gus Series neither the adults or children use each other.  They get along and work together.  As you begin thinking about those cold winter nights and want the child or children in your life to read rather than play video games or watch television, I hope you will turn to the Good Gus Series for a good selection.