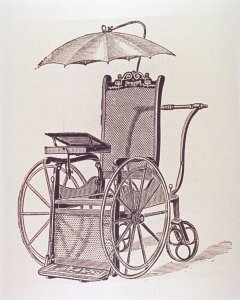 I saw a Christmas movie today entitled “Hats Off to Christmas.” It was about a woman whose husband had died and her son who was in a wheelchair. I love almost every Christmas movie that the Hallmark channel makes. What I loved the most about this movie was that the boy in the wheelchair was simply a boy with a limitation. He had a variety of friends, and participated in several activities. He was trying to make a soap box car for the annual Christmas race. His mother’s boss’s son became friends with them both and helped him turn the car into something that he could easily use to participate in the race. He secretly put in hidden pillows and special features so that if the boy crashed, he wouldn’t be severely injured. He also souped it up so that the boy would win the race. There was also another scene where they got together with another co-worker’s family and played touch football. Instead of the boy sitting on the sidelines watching, they figured out a way for him to not only participate but to have a really good time while playing. No one held back which made the whole scene even more delightful. In Book twenty-two, “The Field Trip” a new family is introduced into the series, The Andersons. Lt. Anderson was stationed at Ft. Stockton. The family had just moved from a fort in Houston. Sheriff Gus and Doc Moore were requested by Col. Hatch to visit the fort. When they arrived at the fort, Col. Hatch immediately brought the Doc to visit with the Andersons. This was the first introduction of Katie in the series who is in a wheelchair. It is decided that the Lt. and his family should live in Pecos so that Sheriff Gus can have the extra help he needed to run the town and Katie would be near Dr. Moore. Katie then becomes a regular character in the series and participates in the activities with all the other children. Since its only fifty-three days until Christmas, a sure fire way to have gifts for the special children in your life is to choose a book from the Good Gus Series.