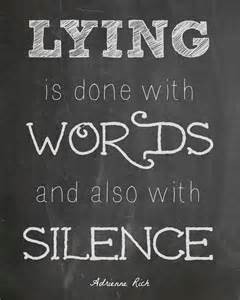 I was watching a Christmas movie the other day, when a woman confronted a man about lying. His response was, “I simply withheld the truth.” I could not believe those words. The man absolutely lied but he preferred to say he withheld the truth. No matter how you look at it he lied directly to her face. I have written about not telling the truth before so all of you wonderful readers know my thoughts. There are many organizations that have withheld the truth particularly when it had to do with studies or negative results from tests. Look at Volkswagen. They definitely withheld the truth for their emission tests. Pharmaceutical companies have withheld the truth in their test results and studies of medicines. They end up being sued once they are caught. If you watch any American television, you will see countless adverts for lawsuits over damages for medical products that the companies’ knew would cause health issues and in some cases death. The same applies to the automobile industry with the air bag scandal this year. The profits must be unbelievable to risk the negative effects. Most of the companies seem to settle out of court. The worst part is that it doesn’t have an affect on their earnings or their continual release of products that may be harmful. Of course, they do release safe products, but why take the chance with products that could cause irreversible harm or death?  There are people who find it easy to lie.  For many it’s a way of life.  If we teach children to lie when they are in their formative years, then it will become natural for life.  There was a Christmas movie about a woman whose daughter asked Santa to give her one wish; to make her mother stop lying.  When the wish came true, the mother was flabbergasted that she couldn’t lie.  It had become second nature to her and telling the truth was not easy.  The movie opened with her standing in a line for coffee lying saying her car had broken down, and she went on from there.  In the end, she learned her lesson.  It was a good example for her child.  In the Good Gus Series, the truth is not withheld.  It’s the best example for children.