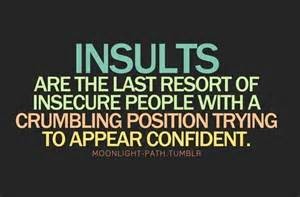 I hate name calling. Children do it to hurt other children. Sometimes they use name calling as revenge towards another child that has hurt them. When people argue, whether they are children or adults, name calling should be left out of the conversation. Its an unfair way to fight or argue. I have seen shows on the TV where older boys, primarily have picked on young boys and used name calling as a way for them to make the younger child feel small and inferior. I have heard them use insults to children with red hair, ones that have too many freckles, very curly hair, light or dark skin, thin and overweight. I have also heard and seen adults do the exact same thing. Its degrading to the other adult and if they are not experienced in arguing, they have no arsenal of phrases to use against the other person to stop them from saying those things. When adults use name calling in front of children, it only teaches the children that is okay if they do it. After all, they copy adults so that they can grow up and be one. Insulting people over their appearance just to win an argument is petty and small minded. There are children and adults who feel self conscious, so that when another individual or group of individuals start with the name calling, the person generally has no idea how to respond.  When adults do it, the other person generally strikes back verbally and the argument goes from a heated discussion to a down right all out fight.  I know people who think that name calling helps them win arguments, but it really doesn’t.  It only ends up with meanness and if there was a relationship or friendship, it disappears. In the old TV show, “Happy Days,” the Fonz was a strong personality.  He also set a good example of abhorring name calling and not allowing anyone around him to do it.  People shouldn’t tolerate name calling in either children or adults.