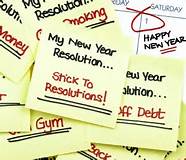 Today is the day when everyone makes their New Year’s resolutions. They range from the following: losing weight, quit smoking, quit drinking, eat at home more, save money, exercise more, join a gym, spend more time with the family, work less, get a new career or job, etc. Many people really believe that whatever their resolutions are that they will follow through. I think that’s why there are gym equipment specials in all the stores and at the workout facilities. They offer unbelievable deals and then by March or April, anyone who signed up at an exercise facility reduces their time at the gym and then eventually stops going. The same applies to the equipment. The greatest intentions leads to selling the exercise products at a greatly reduced price.  Resolutions to problems are a different matter.  Trying to solve ongoing issues isn’t always easy.  There are individuals who work under a difficult manager or supervisor and can’t figure out what to do.  If their age is a factor, they are stuck in that position.  Even though there are laws around the world against age discrimination, it occurs almost daily.  One of the few companies that I am aware of that openly hires older people is Walmart.  One of their basic reasons is that, at least in the United States, the older individuals are on Medicare, and therefore, they don’t have to provide insurance.  There are also family resolutions for problems that continue year after year.  Hoping to find an answer requires compromise and consideration.  Not everyone is willing to swallow their pride and do that. Often it is a life threatening illness, or a person in the military who has been at war, to see that whatever the problem was that it’s petty and should be dropped.  I sadly know a person with terminal cancer who cannot get past who he is really is before he dies.  He still continues to blame everyone else for his problems, cannot recognize when he ever did anything wrong, and thinks nothing of taking other people’s property or money.  He justifies it somehow in his mind, that he is always right and everyone else isn’t as smart and always wrong. There are people who will go through their lives always believing they know more than anyone else and when they speak everyone should listen.  If you know such a person, don’t walk but run away from them.  2016 is going to be a wonderful year for all of us!