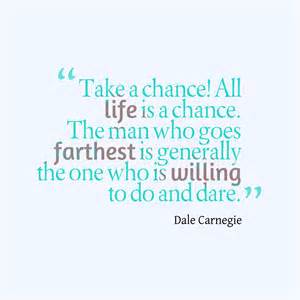 How often have you been told to take a chance? People take a chance on love, a new friend, a job, a career change and even trying new foods. Often the person telling you to take a chance is not willing to do it themselves. If you make a life style change it can be positive or the biggest mistake of your life. In many of the old movies, the lead character generally decided to give his daily grind at the office to become a farmer. The plot usually goes something like this. He is happy to take a chance, but then reality sets in. He has to work really hard physically and he doesn’t have all the modern conveniences including television and in some of the really old ones, no phone either. After a very short time, he realizes he has been a terrible mistake and wants his old life back. Of course, because its the movies, he is able to get his old job back or his business.  In real life, if a person did that, they would basically hope that they could sell the farm and start fresh in a new city with a new job or take the money and start a business again.  There are people who decide to take a chance on something risky.  They end up with more problems as it was the wrong choice. With all the matchmaking programs advertised on the TV, the internet, magazines and newspapers, single people are constantly taking a chance on a person in the hopes of true love and happiness.  The ads claim that the programs work out very well; I hope so.  There a programs everywhere for people who have lost everything and really need a second chance.  They are given decent used clothing, help with their overall appearance including hair, and for women make-up, to help them start over and land a decent job.  The employers who hire them are counting on them to do a good job and rebuild their lives.  Many times the chance the employer gives these people is one of the best decisions they could make.  As these people just want to start over, they give 110% to their work which benefits both the employer and the employee. If you are thinking of taking a chance on anything, weigh your options, list the pros and cons, (this can even apply to people) and then hopefully, checking on contingencies, you will make the correct choice.