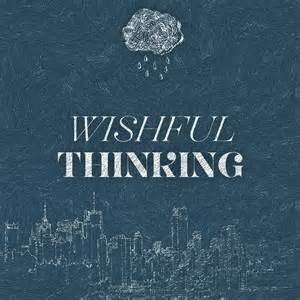 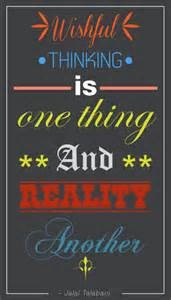 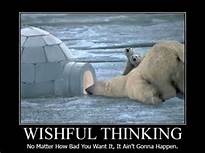 Many individuals belief in wishful thinking. Sure it is great to have wishful thinking once in a while, but not on a daily basis. People who believe in wishful thinking hope that reality is not what it appears to be. They often make poor decisions based on wishful thinking rather than facts, evidence or reality. It’s living in a fantasy world. Sure, we all have wishful thinking to win the lottery in any country in the world. There is also wishful thinking in  the hope that a person might land a promotion even though there is not a real chance. It could be that the competition for the same position is high; the other candidates are better qualified; and the basic experience of the wisher is not as great as his or her competition. As children we fantasized in wishful thinking. It was wonderful to hope for a new bicycle or doll house for a birthday, go on a trip to Disney, or live in a large home with servants. However, the average child would realize that their parents were simply hard working people and couldn’t give them any of the gifts, hopes, and trips they were seeking. Sometimes, children became so engrossed in wishful thinking that it carried on into high school and college. It was those individuals who utilized wishful thinking in hoping to date the star athlete, get into the sorority of of her dreams or fraternity house of his desires, the college of his or her choice, a brand new car, and a fabulous wardrobe.  Then, when reality hit, they were all unhappy.  Many of them continued to live in fantasy land until everything fell apart.  Studies show that if you believe in wishful thinking and think positively that the majority of times everything will turn out they way you wish for.  However, if a person let’s it cloud their judgement, it becomes negative.  Psychologists have a name for the cycles.  It starts with the fantasy phase along with wishful thinking.  Individuals have an unconscious drive believing everything will turn out the way they want and often it does for a while.  They may even move into the dream stage.  However, since is it not real, and as things begin to go wrong, they move into the frustration stage.  Hard as they try, as more things fail, their frustration increases dramatically.  As the make believe disappears and reality invades their life, the nightmare stage begins.   Finally, when everything goes wrong and fails, there is a nasty explosion into reality.  So, as wonderful as wishful thinking can be, everyone is better off living in reality.  Speaking of reality, please visit maecharlesbooks.com.  The Money Manager is a good way to help anyone get back on track financially.  It will help wishful thinking about finances be a pleasant reality.

Wait Until You Are Ready