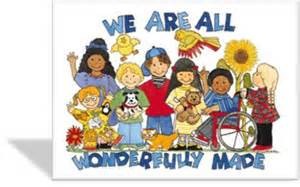 Once again school is starting and everything you see on the TV, magazines, ads of any type remind students not to be a bully.  Its very sad that students need to be told not to be a bully. Adults who are bullies are just as bad as children.  They grow up learning that they can push people around without suffering any consequences.  I am sure you have seen it when a person in a car tries to push you out of the lane you are in to pass you, or honks because you took a second too long moving when the light changed.  Then there are the people who push to get on or off the lift or block the entrance.  They bully past people because their time and lives are so much more valuable than yours!  I read an article today about two three year old children.  They were playing in a park, riding their scooters on a track.  Their mums were nearby watching them along with the other children and parents.  A little boy accidentally bumped into a little girl.  Both children were crying.  Their mothers rushed over and scooped up their children to comfort them.  The little girl’s mother had another, older child with her.  The girl’s mum did not speak English very well.  The little girl’s mother was awful about the little accident.  Another woman spoke to her saying she saw the mini crack-up and it was nobody’s fault.  The woman was furious and walked away to use her phone.  She returned a few minutes later when the boy’s mother and the witness were talking.  They asked if her girl was okay.  She replied using her daughter, that no one was to go anywhere as she had called the police.  The mother and witness were shocked.  So was I as I continued to read this article.  The boy’s mum asked her why but she didn’t respond.  Finally, a policeman arrived and told her that there was nothing deliberate about the accident.  It was simply two little children bumping into each other.  He asked her if she wanted an ambulance and she replied yes.  As the ambulance drove away, the two women continued to discuss it.  One woman suggested that the girl’s mother may want to sue, but then realized that even the police wouldn’t take down the boy’s name and address.  The witness thought that it was some form of bullying tactic.  Then the author of the article surprised me again by saying that she thought that the whole situation arose because her son was black.  I did not see that as a possibility at all.  She wondered if it would always be this way for her son.  Was this some type of early teaching to her child that you can bully people of another skin color?  Frankly, whatever color skin, they were children playing.  I think that’s how bullying starts.  Examples are shown to children that someone weaker, or of another color can be bullied. This happens today with countries who are unable to defend themselves.  The bullies are just larger and more powerful not to mention destructive. There are so many positive examples for children that it was sad that this was a negative one.