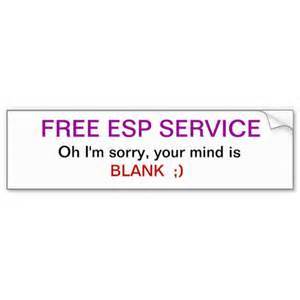 Do you have ESP or do you know anyone who does? Do you even believe in ESP? Many years ago there was an entertainer from Montclair, New Jersey, The Amazing Kreskin, who dazzled audiences with his ability to read thoughts. He was so popular that he collaborated in psychological clinical studies extending into the realm of Parapsychology and the Power of suggestion. There were many people who believed he was a fake and a fraud. They said he had paid secret informants. Today, at eighty years of age, he is still offering one million dollars to anyone who can disprove him. There are many names in the entertainment industry for people with ESP such as Mentalist (like the television show), Psychic (as in the Long Island Psychic also on television), mental telepathy and many more. I saw an old show once in which the wife had a premonition that something bad would happen to her husband if he left on a particular business trip. His neighbor had referred him to this client and it was a good opportunity to make money. He told her it was ridiculous and that he didn’t believe in it. She tried everything to talk him out of it. Finally, on the afternoon of the trip, his car packed, his neighbor came out to his driveway to tell him that the client had called and moved the trip to Friday. The wife was so obsessed that her husband not go on the trip, she called the neighbor’s wife and had her call the client and change it to another day. Needless to say, the husband was furious. As he began to unpack his car, you could hear thunder booming. As he waled into their home, with his suitcase, his son walked in right after them. The son was to play in a basketball game that night but it was cancelled due to flooding. The flooding had washed out a bridge was in the town where the husband was going for the business trip. Naturally, he just looked at his wife and the story ended right there. I never believed or disbelieved about ESP. I would have a premonition from time to time, but nothing significant until one day I told my friend that she was going to have a baby soon. Sure enough in less than a year she was pregnant and give birth to a boy. Another time I was rinsing dishes to put in the dishwasher and looking out my kitchen window. All of a sudden I saw that my son had fallen into a creek and was soaking wet. I called my daughter and husband and told my daughter to find a neighbor boy as he knew where that creek was. Sure enough, they found my son with another boy who had lit a fire trying to dry is clothes so they wouldn’t get into trouble. There is no real ESP in the good Gus Series. There is, however, excellent observation of life and the rescue of children who did not listen to their parents. As you teach your children the importance of following what you say, I hope you will use a book from the Good Gus Series as a lesson guide.