Horses Who Have Escaped 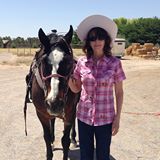 This is Smokey who is a look alike to Gus’s horse Cocoa.

Whenever I read to Children they always ask me about horses. For example, do I own a horse, do horses eat anything besides hay, can I ride (not very well), what type of horses have I ridden. I always answer their questions. I have told this story to children and its actually true. When my children were young, I worked at home and usually had a babysitter to watch my children while I worked. Over the years I had a variety of sitters, some who did arts and crafts, played with them and generally made their days fun and others who thought their sole purpose was to plop my children in front of the television. One sunny day, I was working in my office which had sliding glass doors in both the front and the back.  All of a sudden the sitter rushed in with my children and said three horses had escaped from a neighboring corral. I told her to stay inside and call the owners.  She asked me what I intended to do.  I said I planned on going to the field where the horses were grazing and bring them back.  She told me, as she owned her own horses, that they would never obey.  I told her watch my children and off I went.  You should understand that these were full sized horses weighing around 1000 pounds/453KG.  As I walked across the field, the three horses were grazing contently and didn’t really notice me.  I walked right up to them and asked them to stop eating and follow me.  It took a bit of coaxing, but all three horses began following me.  By the time I had reached the end of the field, the owners were there with a large horse trailer.  The owner asked me how I managed to get all three horses to the road so they could return home to their own corral.  I told her it was easy.  I just asked them.  The woman looked at me astounded.  So now, when you read one of my books and the characters are speaking to their horses, you will understand why.

END_OF_DOCUMENT_TOKEN_TO_BE_REPLACED

A famous saying is "Dogs are man's best friend." Most people love dogs, particularly the friendly ones. There are dogs who growl and ap...

END_OF_DOCUMENT_TOKEN_TO_BE_REPLACED

People often talk about common sense and the lack thereof. However, most people have basic common sense. In these difficult times with ...