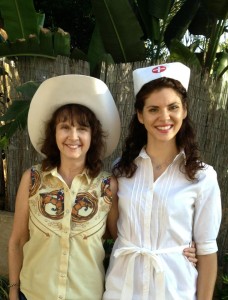 I wrote a book a couple of years ago entitled “Bugs, Bugs, Bugs.” I wanted all children to be aware that even if you don’t have allergies your friends may. It triggered my mind, when one day a child had accidentally swallowed a candy that had been manufactured in a factory with had also made other candies that contained peanuts. The little girl couldn’t find her Eppi Pen and was desperate. The little girl’s friend was calling for help explaining her friend couldn’t find her Eppi pen and needed help immediately. A passer by realized what was happening and ran into the pharmacy demanding a pen. The pharmacist refused. There just wasn’t enough time and the little girl died on the sidewalk. Her parents were devastated but what was worse was the pharmacist felt his job was more important than saving this little girl’s life. I have seen a commercial on television in the United States showing the value of the Eppi Pen. In my story, the consequences are not as dire. Bronco sneaks away from Ft. Stockton where school was being held after the lightning fire burned the school. He missed his Ma so much he slipped away quietly without anyone noticing. He stopped at the Pecos River to feed his horse, Rusty. While he was sitting on a rock, a scorpion bit him. He realized quickly something was wrong and mounted his horse and began trotting towards Pecos. As he began to drift off as an allergic reaction, his horse slowed down sensing something was wrong. Sheriff Gus, who had been visiting Ft. Stockton, discovered Bronco was missing. Sheriff Gus, as usual, saves the day! In the future, as you browse my books, I hope you will keep in mind that all my books have heroes and happy endings.