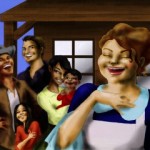 The next time your child or children yell at you think about where they learned that behavior. As I have skimmed through television channels, I have noticed how people treat each other. Many times in simple commercials, people are yelling at each other. Occasionally, I check out cartoons to see what the newest shows have to offer. I am still amazed how characters in the cartoons are presented. The shows portray situations which are innocent enough but the characters seem to be constantly raising their voices. It seems like poor writing to me. Characters can convey various ideas, topics, etc. without yelling. Situations many times do not require the yelling or raising of the voices. This learned behavior of yelling is then passed on to your child or children. I also think it gives children the wrong impression and that yelling is a possible sign of being able to say things at will and even teaches them to lose their tempers.  In my first book, “Pecos Meets Bad Bart” it is clear that Bad Bart is yelling at Sheriff Gus and has a temper tantrum.  Rather than accept it, the towns people whisper that he is a baby and start laughing.  I thought laughter would be kinder response rather then saying mean things.  In the story, if you read it to your children, you will find that Sheriff Gus does not lose his temper.  He also doesn’t yell or be abusive.  Rather, he finds a positive solution without meanness or resorting to violence.  As with all my stories, it has a happy ending.  When I was on the radio, many people commented that after they and their children heard the story, they all wanted ice cream!  When you have the opportunity, please consider “Pecos Meets Bad Bart” for your child’s library.

END_OF_DOCUMENT_TOKEN_TO_BE_REPLACED

Not everything has a practical value in life. There are many items in life that are essential such as food, shelter and clothing.  ...

END_OF_DOCUMENT_TOKEN_TO_BE_REPLACED

Have you ever noticed that two people may listen to a person say something and yet they both believe that they heard something else? ...

END_OF_DOCUMENT_TOKEN_TO_BE_REPLACED

The silent treatment is used by both adults and children. I always thought the primary goal of the person using it was to force the oth...