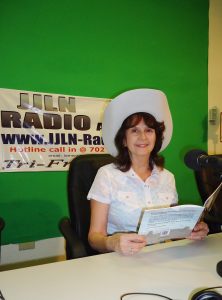 In 2012 and 2013 I did a live radio show entitled “Mae’s Story Time.”  The show became a family event for many households around the world. “Mae’s Story Time” was on e-radio in Las Vegas, Nevada and I had over One Hundred Thousand Plus viewers from around the world. I had to discontinue the show when my daughter became bed ridden with her first child who was born one month premature. She  is now six months old and a healthy beautiful girl. When I did the radio show, people would call in occasionally while I was on the air, email or call the radio station about my shows after hours. I always enjoyed doing the shows. One of my favorite parts was prior to the show when I could view a map of all the countries who were on line to listen and or watch me. I was surprised at some of the comments from parents, grandparents, big sisters and brothers, aunts and uncles, and child care workers. I thought I would share a few of their comments. One grandmother wrote to tell me that I was the best babysitter she ever had for her grandchildren. My thirty minute show had her grand-kids glued to the computer. She loved it and they really enjoyed my stories. A mother called the station and left a message for me. She said Sunday was their new favorite family time. She and her husband along with their four children, including the older children ages twelve and fourteen loved sitting in front of the computer watching my show. She said it was now a special family event including making popcorn to eat as if they were at the movies. I had regular children viewers whose parents would leave a message for me to say hello to their children at the beginning of my show.  One little girl left a message at the station saying she was twelve and loved my Christmas book, “The Special Gift.”  I hope as you begin to make your Christmas lists you will take a quick peek at “The Special Gift.”  It could be your new family traditional book during the holiday season.

In an event, often that is tragic, people will say, " I do not know the right words to say." Individuals will say that at wakes or ...

END_OF_DOCUMENT_TOKEN_TO_BE_REPLACED

In the 1920's up to the 1950's smoking was not only accepted by had doctors' approval.  Many of the old time radio shows had cigare...

END_OF_DOCUMENT_TOKEN_TO_BE_REPLACED

Today is Christmas Eve in many parts of the world.  People are making their way to family and friends to celebrate tonight and tomo...

END_OF_DOCUMENT_TOKEN_TO_BE_REPLACED

Everyone has an opinion about something and everything.  Yet, frequently whatever their thoughts are they will automatically find a...