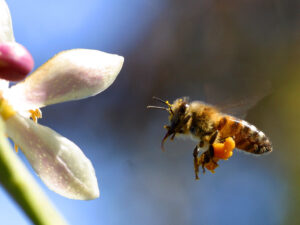 Bees were in the news today as a special report on the internet. The bees suddenly began dying off in 2007. The bee keepers contacted various universities and the United States Government to seek help. They discovered that the Queen Bee and the colonies were scattered and breaking up. Bees are important to our every day life. They pollinate flowers which are not only beautiful, but they are also on fruits and vegetables which make them grow into quite delicious foods. I was watching a Queen Bee one day when I decided to write a story about bees. It also coincided around the time of the National Spelling Bee Contest in the United States. With the advent of the computer, spelling seems almost obsolete. When my children were in school, spelling was stopped as a weekly subject by the end of third grade. I home schooled my son and kept spelling for grades four, five and six. I felt that spelling was so important that I wrote a book entitled “Can Bees Really Spell?” The story introduces a new character, Frankie, and towards the end of the school year there is a spelling bee. The children from the local Pecos School, along with the students from the school at Ft. Stockton were all in attendance for the contest. Miss Patty supervised the contest and Sheriff Gus and Judge Ross were the judges of the spelling bee. As it neared the end of the spelling bee, and there were only two boys left at the final word, the first boy missed, but the second boy while trying to spell has a bee land on his head. There is great excitement but the story finishes with a happy ending.  The Good Gus Series, as you look at the books, may help that special child improve their spelling while learning to read.