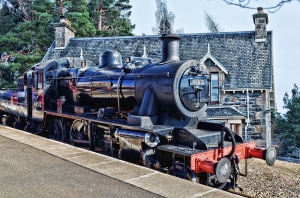 Trains have become popular again particularly since Warren Buffett bought stock in that industry and Sheldon on Big Bang Theory loves them. The first time I took my children on a train other than at Disneyland or Walt Disney World was during the fall season when they were six and eight. The real Mary from Mary’s Cafe’ and the real Glenn also know as the Rev. Glenn accompanied us. It was in the mountains in New Hampshire and it was a glorious day. The turning of the leaves was really quite beautiful. The train back then didn’t serve food so we brought our own for snacks and then ate at a nice restaurant. Today, there are trains with dining service as an evening of entertainment. In the Smokey Mountains of Tennessee, there is a train that travels to view the leaves and also a dinner train. The menu looks quite delectable. The trains in the Good Gus Series didn’t reach Pecos in my books. I do refer to them on a few occasions. For example, one of the characters, Frankie, whose parents both come down with the flu, call upon his mother’s parents who live in Oklahoma. They take the train to Ft. Worth and then Cory travels with Frankie to bring him to Pecos to stay with his Uncle Ray while his parents get well.  There are also a few other books that include trains.  “Hoppy Escapes” from a train and Sheriff Gus has to track him to return him to the train in Monahans, Texas.  Sheriff Gus was accompanying Ray to collect the mail as the trains were replacing the Pony Express.  I seriously doubt that the old trains were very comfortable judging by the pictures I have seen. When you think of the old west and trains, I hope you will consider the Good Gus Series.  You may find the books quite appealing.

I Blog, Twitter and Facebook just about every day except for this past Thursday and Friday as I sliced my thumb open while grating Parm...