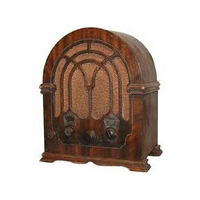 The old time radio shows were the only entertainment people had until the television became popular and affordable. The first broadcast was on Christmas eve, 1906 from Brant Rock, Massachusetts. The first regular entertainment broadcasts commenced in 1922 from the Marconi Research Center at Writtle, England. I was too young to hear the old time radio shows, but I know that from the 1920’s to  the early 1950’s there were a host of  radio shows broadcast daily  including a children’s hour, variety shows, detective mysteries,  and comedy programs. When my children were young, their father bought about two hundred fifty old time radio shows on cassette tapes. We bought them small tape recorders so they could listen to the shows.They listened to them every night before going to sleep. It definitely cut down on nightmares. I  found them interesting and very funny. They loved them. One of my son’s favorites was the Burns and Allen Show. One time when we were with some friends of ours, he made a remark that he had heard on one of the old time radio shows. He had no idea it was in poor taste because when you listen to a show, you do not see people so there is no reference for looks, styles, color or ethnicity. Fortunately, our friends knew he didn’t say those words as an insult. One of the beautiful things about reading, which is similar to the old time radio shows, is that you can form pictures in your mind without ever seeing a person. When adults read novels, there are no pictures so we imagine the scenes in  the books. I think reading gives children a real sense of imagination. I hope when you think about the old time radio shows, you will look at the Good Gus website and stimulate your children’s imaginations with a book from the series.

May people believe that being idle the majority of their day is acceptable. It is important for our minds to be a...