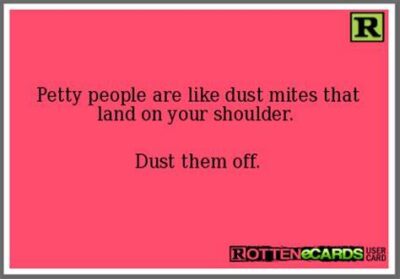 Many people who appear nice are secretly petty. I was watching “The Mentalist” again after all these years and he referred to a principal of a high school as being a petty bureaucrat. The man really was.  He passed out punishments that the students did not deserve. In that one episode, Patrick Jane did discover that the principal had acting in an unprofessional and legal manner.  Patrick suspected that he had hid cameras in the boys and girls restrooms as a few of the students were severely punished and there was no way for anyone to know what they did. Of course, Patrick borrowed paint from the dram club as they were making props for their play.  He painted the boys bathroom with graffiti and then waited. Naturally, he was paged to the principal’s office and the principal reprimanded him. Patrick pointed out that no one knew and then he opened a cabinet and there were all the cameras. There was a period of time when my late husband’s secretary lived with us.  She was extremely petty.  For example, she disliked the way I loaded the dishwasher, so every time I filled it she went back and rearranged it.  If I left my few dishes in the sink, she loaded the entire dishwasher except for my few things. You wouldn’t mind but I did the majority of the cooking while taking care of my children and working. Sadly, there is so much more but I do not believe on dwelling on the past or negativity. Unfortunately, you can easily see pettiness in the videos on Facebook. It is frequently in short videos in the restaurant business. The customers who do not appreciate the service show their pettiness by not tipping. I did not allow that type of behavior in any of my stories in the Good Gus series. The Good Gus Series is available online at Kindle, Nook and Waterstones. Hard copies, personally autographed, are available through our website www.goodgusbooks.com along with past blogs for your reading enjoyment. Digitizing for all the books is coming soon!

END_OF_DOCUMENT_TOKEN_TO_BE_REPLACED

In the 1920's up to the 1950's smoking was not only accepted by had doctors' approval.  Many of the old time radio shows had cigare...

END_OF_DOCUMENT_TOKEN_TO_BE_REPLACED

It seems in life now people are just faking it. In the news today,  a GOP person was cited for using untrue data.  I know that peop...

END_OF_DOCUMENT_TOKEN_TO_BE_REPLACED

It is sad but many people tend to relive their past and look backwards rather than look forward.  The past is gone and unless you a...

END_OF_DOCUMENT_TOKEN_TO_BE_REPLACED

There is an older song entitled "I See Your True Colors" which really means that the singer could see a person's true worth.  So ma...