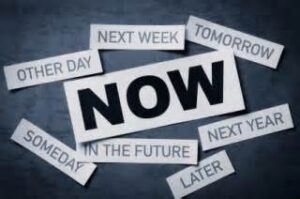 How many people do you know where you think procrastinate should be their middle name? I don’t know about you, but I find it very difficult to deal with people who tend to procrastinate. When we were little we loved to procrastinate as playing was so much more fun than doing chores. As we progressed in school, procrastination occurred with homework and special projects. Many of my friends would wait until the absolute last minute to do a project that they should have researched at the library at least once and two or three times would have been better. Back then if your family didn’t have a set of encyclopedias, the library was your only resource. The grocery in the United States had specials for encyclopedias. The first one was really inexpensive and then if you spent a certain amount you could buy the balance of the encyclopedias at the rate of one a week. It was a good deal especially if you didn’t live walking distance to the library. The first time I procrastinated on a project was my last. I was punished for not starting it and completing it in a timely manner so that I was ready to turn it it in on the due date. As people progress into adulthood, if they can find ways to procrastinate, then it becomes a way of life for them. Its learned behavior that should be unlearned. Even in the workplace, if you work with a procrastinator, they tend to make the environment difficult. It reflects poorly on the boss or manager and they may take it out on the non procrastinators. I know a person who is a server in a restaurant. He told me that as part of his job that you are required to refill the salt and pepper shakers, the condiments that remain on your section’s tables, and the condiments that are available for your section should a customer require one. When he is working, he refills the condiments as he goes along so that when he is finished at the end of his shift, he doesn’t have to stay longer just to complete this task. One evening, when it was a little slow, he had refilled all his condiments. As he was wrapping up and wiping tables, a co-worker who was a procrastinator, switched all of his finished condiments to her half empty ones. He was furious but there was nothing he could do. She was suddenly finished and leaving and he had to refill all of her condiments. A small example, but the procrastinator should have at least had the decency not to take another person’s work because of her bad habit. He is obvious more careful now.  Procrastination by people lead to tickets for not mowing their lawns, fines for not making minor repairs on their vehicle, losing out on good holiday deals, repairs that may have been simple in a home that by  delays turn into huge issues, and so much more.  A new study in  ‘Psychology Science’ stated that by changing a person’s perception of time when something is due or a task that must be completed, may help them to not procrastinate.