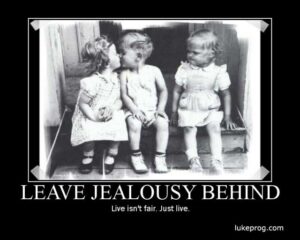 When jealousy rears its ugly head everyone wants to run for cover. Its a terrible emotion that people inflict upon others. When a person is jealous, they behave badly. They say terrible things; they hurt people;  then after their rant, they feel foolish and really regret their actions. When men and women  are in relationships  become jealous, it leads to nasty fights, and may even end relationships.Its also very embarrassing for all parties.  When children are jealous of other children they tend to be mean, take the other child’s toys, and generally misbehave towards the child they are jealous of. Some of the unrest in the world is because of jealousy. Many times groups want what the other countries have and use war as a way to obtain it.  Often, I believe,  crimes are committed because of jealousy. The criminal sees a person who has worked hard and is doing well financially. They secretly wish they had everything the successful person owns. The criminal is jealous and then steals their money and/or possessions. Its one of those emotions people need to learn to control. I recently read that people who have a severe jealousy streak are more likely to develop Alzheimer’s disease. As you wonder what can you possibly buy for any child on your Christmas list to give them positive examples of good behavior, I hope you will think about a book from the Good Gus Series where jealousy doesn’t exist.