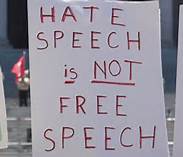 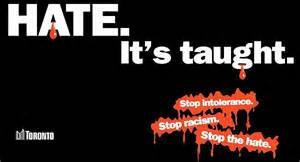 Hate is a strong word. When people say that word it’s difficult to believe if they truly hate or just have an intense dislike of something or someone. Individuals who truly hate have strong feelings. Maya Angelou said, “It has caused a lot of problems in this word, but it has never solved one yet.” Its true. Hate does cause problems but no one ever looks at the reason and how to stop it. All the political strife in the world is a result of many things, but among those reasons is hatred. If a person is raised to hate, it is very difficult to break their programming or training.  Look at history. Wars have started over incidents that involved hatred. Its really sad.  Ancient history had many battles over disagreements and hatred.  What was the point of all of it?  No one really won anything and in the end, way down the road, they befriended their foes.  Severely disturbed criminals will often admit to hating people, groups, religions,  a specific ethnicity, and even political figures.  If you examine past crimes, you will see that they were committed based on hatred.  A young man who strolled into a black church earlier this year and started shooting all the black people;  why?  He hated them.  How can you hate someone you don’t even know?  How can you hate based on skin color?  We are all people living and breathing just trying to get by. Look at Jack the Ripper.  He really hated prostitutes and apparently it was his goal to kill as many as possible.  Even if you disapprove of a person’s work, it doesn’t mean you should kill them.  The psychological issues for people who hate and commit crimes has to be very deep and extremely strong.  John Hinckley who shot President Reagan and paralyzed John Brady his motives  were not for hate but rather to make actress, Jodie Foster notice him.  Not every crime is about hate.  My grandmother taught me never to hate. Its a word that isn’t in my daily vocabulary. Of course, if I try on an outfit that looks terrible or eat a food that tastes awful, the hate word may slip out. Maya Angelou and my grandmother were right.  No one should hate and it serves no purpose.  That is what is so ideal about the Good Gus Series.  There is no hated and everyone works together to get along and help each other.  The series are a wonderful lesson to young children and an ideal Christmas gift for under the tree.